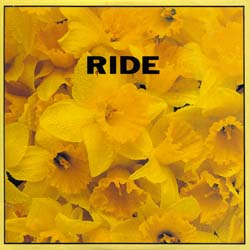 made in england
distributed by the cartel
recorded at blackwing studios, london by ken
like a daydream remixed at matrix studios by alan moulder
daffodils by lou

The run-out groove on side A of the 12″ has the words ‘Daffodils to Diana’ etched into it. Side B has ‘Steve for Emma’
No major variations
Test pressings of this EP are scarce, since sound quality was poor. As a result, finished copies were sent to press, some of which included press releases (below)